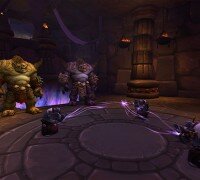 Seven of these bosses can be found in Highmaul. This ogre city, located in western Nagrand, is the first full raid zone of the expansion. By defeating Imperator Mar’gok and his minions, players will receive new epic gear ranging from ilevel 640 to 685 depending on the difficulty level. Players can also finish the next step of the new Legendary quest and get an ilevel 690 ring appropriate to their character.

Highmaul, like other raids in Warlords of Draenor, is available in four difficulty levels. Looking for Raid is the easiest setting, intended for groups of 10-25 created through matchmaking. Normal and Heroic are the next steps up in difficulty but also allow for raid groups of 10-25 players. The most difficult level is Mythic, designed for hardcore teams of 20. Read More →