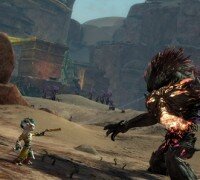 If the living world isn’t your cup of tea, take heart because the update also features gameplay tweaks including the new Silverwastes locale. ANet says that “mysterious ruins in the area will provide key battleground locations in the ongoing war against Mordremoth’s expanding armies. Players will fight to hold strategic locations, call in pact allies for aid and take a stand against the growing threat.” The update also boasts new Bandit Crests, which can be vendored in exchange for recipes, materials, and armor pieces.

Massively’s Anatoli Ingram spoke to ArenaNet last month about the lore unfolding in these next chapters. Enjoy the new screenshots in the gallery below.