If ever there was a tool custom made for cosplaying it would be a 3D printer. Even if you’re not the most artistic person in the world, there are multiple options of design programs available that virtually anyone can use to create cosplay props and costume parts, all on a machine that has become astonishingly affordable in the last few years. Granted, 3D printed parts still require an investment of time in terms of constructing larger parts and painting them to match your costume, but most cosplayers are already used to spending an inordinate amount of time on their hobby anyway. Even with finishing and painting time included, most 3D printed props are still easier and faster to make than using traditional methods. 3D printing and cosplay really is a match made in whatever the afterlife in World of Warcraft is called.

Finnish gamer and Thingiverse user Ceravyn has been experimenting with some PETG filament that she had purchased on a whim. Upon noticing that the material had a translucent finish she decided to incorporate that quality into a new cosplay project. As a casual World of Warcraft player, Ceravyn (or Sara) decided to design and print the Warhammer of Blackhand the Destroyer, an Orc warlord who plays a significant role in several of the Warcraft game expansions, story lines and novels. In the game, Blackhand’s hammer glows with a fiery magical energy, so Sara designed a version of the warhammer to contain LED lights with the transparent PETG windows in the hammer to show them off.

Sara had previously only worked with PETG briefly, so building a model using the material was quite new to her. However she had created cosplay props before and comfortably found herself designing the hammer in SolidWorks entirely from memory. While she sheepishly admits not actually double checking her design with reference pictures, it turns out that her memory was pretty good and the warhammer should be almost instantly recognizable to most WoW players.

“I chose this item as the first test model simply because I only own red PETG at the moment so the glow had to be reddish or orange and the hammer wielded by Blackhand seemed like a perfect test piece. It is also a decorative item, fan-art, cool thing to own if you’re fan of the game, and just a fun thing to print and build – including different printing materials, little bit of electronics and surface finishing with paints it has a bit more challenge to complete than a simple PLA print,” explained Sara of her project choice.

PETG is a modified version of PET, a popular thermoplastic polymer resin commonly used to create polyester clothing or plastic containers, or it is often combined with glass fiber for engineering resin materials. While there are PET 3D printing materials, PETG is quickly becoming a popular alternative thanks to its lower melting temperature and durable yet still flexible finished state. It is also considered to be a nontoxic alternative to harder 3D printing materials like ABS or nylon. Additionally, it is gaining popularity for exactly the reasons Sara was experimenting with it, the slight transparency of the finished prints.

Blackhand’s Warhammer took Sara about two hours to design, and she estimates that it took her almost a full day’s worth of printing to complete. She spent another day cleaning the 3D printed parts and giving them a few coats of paint before wiring up the simple LED mechanisms. After assembling everything she detailed the completed warhammer using some standard Citadel acrylic paints. Her design left plenty of space inside of the model to insert the two AA batteries used to power the lights that gave the warhammer its glow. She used red PETG for the transparent parts and two orange LEDs to create the glowing effect, and the rest of the model was printed in standard PLA. 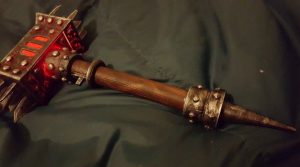 As you can see from her pictures, Sara’s version of Blackhand’s Warhammer is very close to the in-game version and it looks pretty great when lit up. Sara says that she was quite pleased with how her PETG experiment came out and is planning to incorporate it into similar designs for future projects. Let us know if you have any intention of creating this prop in the WOW Warhammer forum thread on 3DPB.com.