You are browsing the site archives by month.
30Apr 2015

Play Guild Wars 2 for a chance at beta key loot. Plus a tease of the first Specialization to be announced?

ArenaNet today announced how players will be able to get access to the next Guild Wars 2: Heart of Thorns PvE closed beta event and it is pretty nifty. Starting on Tuesday, April 28th, monsters in the two maps added during the Living World Season 2 (Dry Top and the Silverwastes) will have a chance to drop a rare portal item. Upon looting these portals, the player’s account will be flagged to gain access to the next PvE closed beta.

While the blog post does not give any concrete dates for either the beta or when these portals will cease to drop, it does say that these portals will only be available for a limited time. Additionally, the portals are going to be account-bound, so every player will have to go get his/her own if they wish to play in the next beta. The beta flagging will occur once the item is acquired, so if you accidently destroy the portal don’t worry as you are already set to participate in the beta. Read More →

A decade ago I was a short kid from a small town who spent much of his spare time playing videogames. A decade ago, one of the games that I – and many of my friends – were sinking hours into was the browser MMORPG-lite called Runescape. This was my first (and until much later, only) foray into the realms of massively multiplayer and online, and was a great tool for building and strengthening social connections. And yet, despite Runescape featuring fairly prominently during some of my most significant formative years, its true impact didn’t come until many years after I stopped playing.

Understanding how Runescape can have any kind of impact – let alone one of significance – first requires some background knowledge. I spent near enough to the entirety of my life in the small semi-rural town of Glass House Mountains, in the same “rustic” Queenslander, on the same gravel street that only existed in refidex around the same time that Google Maps became the go-to navigational tool (pizza delivery was the worst.) In January of 2012, that same small-town kid – now 19-years-old – packed up his suitcase and caught his first ever international flight for an exchange program to the University of Wyoming, USA. Read More →

I think there may be a bug with the “wet” effect on our characters. I didn’t notice anything wrong until doing a bunch of Ramuh Extremes. The first time on entering a Ramuh Extreme (where you still have the circle that you can’t leave until everyone is loaded in) your character has full wet effects, as in pic 1. However, after a wipe, you’ll see that the wet effects have been removed/diminished when I have changed no settings, as in pic 2. The wetness on entrance to Ramuh Extreme is different then after a wipe, which is a bug already. But I’m guessing that maybe the wetness is bugged for all raining locations, such as pic 3 where I see no wetness while in the rain. Excuse the naked lala that I’ve used to amplify the wetness I’m trying to show.
Area and coordinates: Anywhere Raining, and Ramuh Extreme on entrance
Steps:
1. Join a not-in-progress Ramuh Extreme, and see the wetness on character
2. After wiping, look at the wetness on the character again, and notice that it isn’t really present anymore except some on the legs
3. Same thing for raning locations, nowhere is the wetness graphic as intense as on the entrance to Ramuh Extreme.

Note I am playing on maximum graphics with “wetness” in character settings on, except with occlusion culling. No changes to any settings were made between the pictures.

Maybe Shooters Just Need To Give Up On Campaigns Entirely

Don’t mistake me: I love campaigns. In fact, I tend to completely ignore online multiplayer.

But at some point, we should probably acknowledge the reality of the situation: If the biggest shooter franchises in the world completely ditched the campaign, would anyone really care? Would anyone even notice?

Let’s face it, nobody is lining up for a midnight launch for a new Call of Duty or Battlefield or whatever so they can rush home and play the single-player quest. That just doesn’t happen. Most people I know don’t ever touch the campaign; the bigger shooter fan they are, the less they’re interested in solo play. Developers are putting a ton of money and resources into creating these campaigns and honestly, nobody even appreciates it. Read More →

The journey from the beginning of A Realm Reborn to the culmination of the events that transpired at the end of Before the Fall – Part 2 has been long, epic, and full of momentous cutscenes.

To celebrate the finale of A Realm Reborn as we head towards Heavensward, the Community Team will be bringing back a contest held before the dawn of the seventh astral era – yes, the “We Dub To Make it Ours” contest is back, but slightly remixed! This time around we’re challenging you to select a cutscene that took place from 2.0 to 2.51 and add your very own voice acting to it. It can be one that is already voiced or one without! The choice is yours and yours alone! Speaking of choices… you can also choose to enter into the serious category or the comedy category. The Community Team will be selecting up to three of the top submissions for each category and awarding players with a bundle of loot.

Visit the official forums for all the details.

Square Enix has released a new trailer for Mobius Final Fantasy, its upcoming Final Fantasy Mobile RPG previously titled Mevius. The video provides a look at various story scenes, battles, and some of the various jobs you’ll be able to assign the protagonist.

The story of Mobius Final Fantasy is connected to the original Final Fantasy. In the game, players take on the role of Wal (default changeable name), who has woken up in a strange new world. Under the guidance of a mysterious female and supported by various characters, Wal is now on the path to seek answers.

Led by famed producer, Yoshinori Kitase, who started work on the Final Fantasy series since 1991, Mobius FInal Fantasy is getting closer to its Spring launch in Japan on both iOS and Android devices. At the moment a release date for the west hasn’t been announced, but the game is probably coming, considering that it has an English website already. Read More →

The story is set during the chaotic turn of the 10th century; the world starts to emerge from the Dark Ages divided and at war. Stepping from the ruins, you start as a young noble and must restore your lands, recruit your army and contest the throne. Read More →

Yesterday, right on cue, WoW Tokens went live. Today, they’re worth quite a bit less. The tokens are in-game items which can be purchased for $20 and exchanged for gold or game time, with their value in gold determined by the market. Blizzard said last month that it would set an initial value and then let it fluctuate based on supply and demand. And fluctuate it has, with the Token shedding a full quarter of its worth in gold in a single day.

At launch, a $20 Token was initially valued at 30,000 gold, and actually pushed beyond that in the first few hours after release. But then it started to go down, down, steadily down, and now, according to wowtoken.info, your $20 Token now equates to 22,405 gold, more than a quarter less than the starting price. 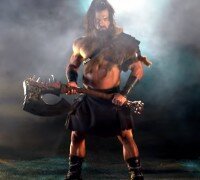 One of the most famous weapons from World of Warcraft has made its way into the real world thanks to some expert blacksmithing from a Hollywood prop maker.

Tony Swatton is a blacksmith from London, England who found fame in a YouTube series called “Man at Arms,” where he would recreate a famous piece of Hollywood hardware. During his stint on the show, Swatton built real-world versions of the Klingon Bat’leth, Link’s Master Sword, Halo’s Energy Sword, and a slew of other famous weapons.

Last year, Swatton handed the series over to a crew of new craftsmen, but he hasn’t given up the hammer just yet. So, when Blizzard approached the seasoned smithy to create a replica of the Gorehowl from World of Warcraft, Swatton happily signed on.

If you’re a WoW aficionado, you obviously understand this weapon’s importance in Warcraftian lore. The Gorehowl is the weapon that Grommash Hellscream used to kill Mannoroth and lift the blood curse from the orcan race. His storyline stretches back to Warcraft II, and he played a major role in Warcraft III. Plus, he’s the central antagonist in “Warlords of Draenor.”

So, for many World of Warcraft players, watching this in-game item become a real-life weapon is something close to a religious experience.

After checking out Blizzard’s models and taking a few measurements, Swatton decided against casting the Gorehowl out of solid metal. Compared to Orcs, real-world humans have the lifting capacity of a nursing home resident with a vitamin deficiency. So, a 600-pound axe isn’t very realistic.

Instead, Swatton crafted the axe head around a wooden core, customizing the outer shell with welded metal. This meant that the axe would maintain the look of the digital version, but it’d be light enough for our tiny, human arms.

After the weapon was finished, Swatton and a handful of Blizzard folks annihilated some fruit, a ham, and a Murloc ice sculpture. Michele Morrow, an occasional presenter for Blizzard, was kind enough to tweet some pictures from the set. Check it out:

If this kind of game-related blacksmithing is something that you enjoy, be sure to check out Man At Arms’ latest creation, Legend of Zelda’s Hylian Shield.

‘World of Warcraft’ Adds TINDR Box To Latest Patch Update: Is It An April Fools Prank?!

Blizzard has released an April Fool’s day prank on its World of Warcraft: Warlords of Draenor players.

The developers announced a revision to their Patch 6.1.4 to include another feature they plan to launch with the update: T.I.N.D.R. Box. It’s a “dating gadget” that allows all races find love. All your character has to do is upload a photo from their S.E.L.F.I.E. camera and start swiping away.

“Acquiring a T.I.N.D.R. Box is easy! Similar to the S.E.L.F.I.E. camera, you’ll be given a random mission in your Garrison that will award a T.I.N.D.R. Box. It can then be applied to any level 100 Follower just like any other upgrade, and that Follower—armed with their new dating gadget—will spend countless hours swiping left and right as they meander through your Garrison, overriding whatever task you’ve assigned them to,” according to Blizzard’s blog post. Read More →