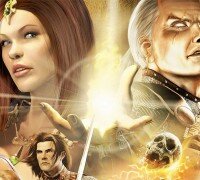 Ten years ago today, Sony Online Entertainment released the follow-up to the game that put massively-multiplayer online role-playing games on the map. Two week’s later Blizzard came along and set the map on fire, but some of us will never forget EverQuest II.

November 2004 was a magical month for MMO fans. Up until that month, EverQuest was synonymous with the genre, held up as an example of the appeal of playing online together as well as the possible negative side effects of immersing one’s self in online fantasy worlds.