You are browsing the site archives by month.
26Jan 2015

Just some days ago, ZeniMax released a 23-minute “Supercut” trailer of its hot title The Elder Scrolls Online. According to ZeniMax, it costs over a year to make this CG trailer. Though the promotion period of the game has already passed, we can still see the sincerity of the firm in this trailer.

In The Elder Scrolls Online, three alliances struggle for control of the Ruby Throne and Tamriel itself. The chaos of war engulfs the Imperial province of Cyrodiil, and sinister forces from Oblivion seek to take advantage of the Empire’s instability, hatching a scheme to enslave all mortal souls. Released originally in four separate parts, this breathtaking cinematic trailer takes you directly to the heart of the war. Witness the three alliances clash in a deadly battle for the Imperial City, unaware of the Daedric threat waiting for the perfect moment to launch its assault.

The end of P2P MMOS is close ,since TESO switched to B2P ?

Zenimax Online announced to abolish the subscription for the MMORPG The Elder Scrolls Online. What this means in general for the payment model?

Last night the Zenimax Online bombshell: The MMORPG The Elder Scrolls Online will no longer need a subscription from 17 March. Who owns the game may continue playing for free, who it has not yet, however, it must buy in stores. This payment model of MMOs is changed to one as known in Guild Wars 2. By converting the game also gets the new name The Elder Scrolls Online: Unlimited Tamriel.

It was clear that Zenimax Online will switch their most popular game from P2P to B2P. After been since the launch in early April 2014 no official Subscribers known and players spoke of empty servers already you could think that you would discuss internally via a change in the pay model. It ESO was regarded as the AAA MMORPG and the developers said that they would definitely find enough with this standard of quality players who would be willing to enter into a subscription. Read More →

Albion Online announced to kick off winter alpha event on January 26th with a new trailer released first to satisfy the curiosity of players. One-minute long video clip gives you a glimpse of the world that you’ll play in during the Winter Alpha.

Albion Online is a new MMO which combines a player-driven economy, hardcore PvP and a classless character customisation system in a cross-platform, shardless world. Currently the development team is welcoming founders for Albion Online. If you are interested in, don’t hesitate to become a founder to support it, in return, founders will get exclusive items. Read More →

Innovation is important to promote a genre. But what would be the best innovation for MMORPGs?MMORPGs are currently in a state of stagnation. There is little change, and most MMOs play very similar. But innovation is exactly what the genre needs to move forward and not be eventually forgotten.In the field of MMORPGs innovations could look like this:

In most MMORPGs are NPCs day and night on the spot. A dynamic, living world could provide much more variety. NPCs who pursue a regulated life, work, meet in a tavern and go to bed at night would enrich the game world.

– NPCs with a meaning in the game world. Go to NPCs by a regulated daily routine, they should participate through their work and on the economy of the game world. Miners build from ore and take it to the blacksmith who manufactures thereof armor and weapons. Farmer bring harvested wheat to the miller that processes this into flour, which the miller gets to bake bread. Read More →

In today’s patch sneak peek of Final Fantasy XIV, Square Enix gave you a glimpse at the main scenario, and the latest case of Hildibrand, agent of enquiry, inspector extraordinaire. You can also catch a glimpse of Odin, the Dark Divinity, in battle – who’s grown in power since appearing at Fan Festival 2014.

With the emergence of a new emperor in Garlemald, the threat of an imperial invasion once again looms over Eorzea.
Meanwhile, revelations of conspiracy have sown strife among Ul’dah’s ruling class, and the sultanate’s precarious peace now hangs in the balance. A storm of chaos gathers; will the Scions of the Seventh Dawn be able to weather the arduous trials it brings? 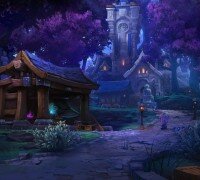 Dataminers have burrowed into World of Warcraft and dug out the latest details of the game’s next update. The info reveals numerous details about the upcoming 6.1 patch, including new quests, items, graphics options and, for some reason or other, Twitter integration.

Twitterers will be able to tweet screenshots and post suggested tweets, such as “I just earned the %s Achievement! #Warcraft” and “Check out this Achievement! %s #Warcraft”. Good hashtag usage there.

What else? New quests will be centred around the Iron Docks. Raiders will get a UI-based pat on the back for downing a boss, and new anti-aliasing options will let you pick between MSAA, SSAA and SSAA + CMAA.

As for Garrisons, they’re getting a bunch of new options. Scout Reports will give new missions, Mission Completion Orders will instantly complete a mission, and Rush Orders will complete five work orders. If that all sounds too much like work, you can summon 10-40 player bosses to your garrison. To fight, not to have tea.
You can see a full list of patch 6.1’s features over at MMO Champion. The build is planned for the PTR soon.
Thanks, PCGamesN.

As we’ve seen, Warcraft is definitely a cultural icon now, and expect the movie and the novel, there will be another Warcraft themed comics! According to Dark Horse Comics official blog latest release, they has announced the upcoming release of a multi-volume series detailing the history of the Warcraft universe: World of Warcraft: Chronicle. Citizens of Azeroth, you won’t miss this chance to lost in its enchanting history again.

World of Warcraft: Chronicle Volume 1 is a journey through an age of myth and legend, a time long before the Horde and the Alliance came to be. This definitive tome of Warcraft history reveals untold stories about the birth of the cosmos, the rise of ancient empires, and the forces that shaped the world of Azeroth and its people.

The first volume of the series is due out on November 4, 2015 in comic shops, and November 17, 2015 in bookstores. For lore fans, this looks like it’s shaping up to be the definitive book to pick up this year, and sounds like it may very well be full of brand new lore spanning the length of Warcraft’s history, starting with the mysterious beginnings of the cosmos itself — something that plenty of lore fans have been wanting for a very, very long time. You can pre-order your copy of World of Warcraft: Chronicle Volume 1 today over via Amazon, or check with your local comic book retailers to pre-order a copy as well.

The owners of BLR developer Zombie Studios made the announcement today that they would be retiring and shutting down the company. The goodbye letter was posted to the Zombie website Wednesday evening:

As noted in the letter, continuing development of the F2P shooter, which is published by Perfect World Entertainment, has already been transferred to Builder Box Games. The changeover actually occurred on Jan. 1 and was announced in the BLR forums. Builder Box Games employs much of the staff that created Blacklight: Retribution, including Zombie Studios’ former Director of Production and Technical Director.

League of Legends Players With Good Behavior Getting Free Stuff

If you demonstrated positive behavior in 2014, you’ll receive a mystery gift sometime this week.

Christmas may have come and gone, but League of Legends developer Riot Games is not yet finished handing out gifts. In a post on the developer’s website last night, Riot explained that players who demonstrated positive behavior in 2014 are being rewarded with free stuff.

From Riot: “Over the next few days, we’ll be rewarding positive League of Legends players with a classic Mystery Gift as thanks for being such an awesome part of our community. If you haven’t received a chat restriction, ranked restriction, 14-day ban, or permanent ban in 2014, and you meet the requirements to receive a Mystery Gift (you’re Level 5 or higher and there are at least 10 skins you don’t own), you’re on our list!” Read More →

Hello and welcome to making Gold in Archeage! This guide aims to educate you in all the basic ways you can make gold in Archeage.

How is gold brought into the economy?

Coinpurses
Quest rewards
Vendoring items
Tradepacks
Fishing
All other ways of making gold involve trading gold that has been brought into the economy between players for various items, goods and services.

A Trade run is the activity of transporting a trade package to another location. Each zone has roughly 3 different tradepacks you can craft. The further the location from where you crafted the tradepack -> the more gold/gilda stars/resources you’ll get!

You can get one of three potential rewards for doing traderuns, what you get depends on where you’re going: Read More →